This blog speaks for itself. I think Charlie Brown needs a camera now....

Mary Oliver is going to be at Beneroya Hall next week offering and evening of her poetry reading. I had to buy tickets a month in advance because when she was here two years ago, her tickets sold out so quickly that multitudes of people had postings on craigslist just hoping for tickets. You would have thought a rockstar was performing. Stephen King came for a reading that same year, same venue, he didn't have a sold out show. Funny. But there are scores of people who have no idea who this woman is.

Mary is an american poet who has lived in Provincetown, Mass. for 30 some odd years with her parnter, Molly, who recently passed a couple years ago. Mary has won the Pulitzer Prize for poetry which has a great focus on nature. Think Leaves of Grass but with no whining. She writes about ravens, turtles, ponds, cattails, hawks, bears, marshes and beaches with her dog. Her poetry enchants my spirit and inspires my senses.

Her books include Owls and Other Fantasies, House of Light, DreamWork, White Pine, West Wind, The Leaf and The Cloud and What Do We Know. She has also written five or so books of prose which include Blue Pastures, Rules for the Dance and Winter Hours.

From Thirst, her most recent book (written after Molly's death):

When I Am Among The Trees,
especially the willows and the honey locust,
equally the beech, the oaks and the pines,
they give off such hints of gladness.
I would almost say that they save me, and daily.

I am so distant fromt he hope of myself, in which I have goodness, and discernment,
and never hurry through the world
but walk slowly, and bow often.

Around me the trees stir in their leaves
and call out, "Stay awhile."
The light flows from their branches.

And they call again, " It's simple," they say,
"and you too have come
into this world to do this, to go easy, to be filled
with light, and to shine."

Little Dog's Rhapsody in the Night

He puts his cheek against mine
and makes small, expressive sounds.
And when I am awake enough

he turns upside down, his four paws
in the air
and his eyes dark and fervent.

Tell me you love, he says.

Could there be a sweeter arrangement? Over and over
he gets to ask it.
I get to tell it.

Also, Why I Wake Early:

Hello, sun in my face.
Hello, you who make the morning
and spread it over the fields
and into the faces of tulips
and the nodding morning glories,
and into the windows of, even, the
miserable and the crotchety -

Watch, now, how I start the day
in happiness, in kindness.
Posted by Tiff at 7:38 AM 1 comment:

Henry Darger's "Realms of the Unreal" 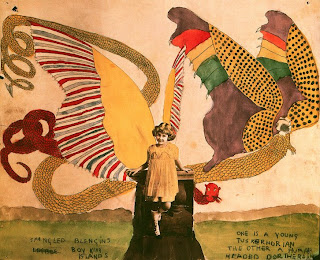 A few years ago, I went to see an exhibit at the Frye Museum. It was about the work of Henry Darger (1892-1973), a recluse whose artwork was found after his death. Upon clearing out his apartment, his landlord found hundreds of pages of handcrafted art and notes. Once they were put together, it was realized that it was a story, no an epic. The story revolves around the seven daughters of Robert Vivian. They are princesses of a Christian nation called Abbieannia. They help rise against the evil John Manley who maintains a regime of child slaves imposed by the Glandelinians. Children fight in their own defense, sadly often slain or viciously tortured by the Glandelinians.

Henry was orphaned very young and spent his childhood in institutions. He lived in the same Chicago apartment for 40 years. He collected newspapers and magazines, mostly from the trash. Henry used cutouts and trace pieces to create pictures then he went over them with watercolors. Throughout his life, he did this and created the epic story of the rebel Vivian Girls in what would become known as "Realms of the Unreal".

As I walked through the exhibit, I was fascinated by his repetitious drawings and tracing. He used a lot of the same images again and again. I was also curious about the story and why he was such a fierce defender of abused children. I found out that Henry named one of his characters, Annie Aronburg, after a girl he read about in the Chicago Times in 1911. This five year old girl had been found strangled and her murderer never found. That story thouched him enough that he included her in his story, maybe as a way to defend her. The final portion of the exhibit was several very large panels of The Vivian Girls rise and battle scenes showing two different endings to the story. If you have time, read about this gentleman or see the documentary done about his work and the quiet man who created a world of his own and stood up for what he believed in the only way he could.

Watched a foreign film called Mongol (2007) about the young life of Temudjin, whom we all know as Genghis Khan. There of course is not much known of his early life or most of it for that matter. Oral history has way of evolving over time and certain matters are embellished or omitted all together (ie: the bible). Therefore, I was not sure what to expect out of this film.
All I did know was that I was in Warrior mode when I was reorganizing my netflix queue. The preview however caught me. As it should, that is it's sole purpose.

So what I got was this: clear, crisp, sweeping, artful beauty, and lines intended to make you laugh out loud. Mongolian culture is not something I know a lot about but I was completely enchanted by them in this film.

Foreign films are mostly beautiful to me. However sometimes the story lags and either there is not enough happening on screen to tell the tale or there is little useful translation to make it worthy.

Mongol is the first of three installements regarding the life of Temudjin. If you know nothing of this man, watch this. You can understand him, fight along with him, feel the honor of him.

Tremendous storytelling and beautifully done. I watched it a second time through.
Posted by Tiff at 4:16 PM 3 comments:

Stories can be told orally, through script, through a brush or through a lens. I want something to immediately catch my attention. I want a provacative jacket cover, an intriguiing twist of words, a line of color where none should be and a picture that grabs you and weaves a tale in one still movement.

NPR is my home page and they have a series called Picture Show. It's the first thing I look at just before the Monkey See blog. Today's picture show had me shrieking like a girl and was immediately forwared to my favorite obsure-loving friends. A photographer by the name of Lyndon Wade was featured much to my delight (note the above shreiking). Lyndon is lyrical, fantastical , theatrical. He is vibrant, twisted, funny, clever, dark and light. He has composed a series as his homage to Alfred Hitchcock's The Birds which flat out kicks ass. He uses frightened children. As a child, I remember being very afraid after seeing that movie. He has also done a series called Room 107 that follows several possible scenarios of happenings in a cheap motel room. Lyndon has a keen eye that makes me feel like I am looking at a collage or pop up book. I can't express my new found love for this man's work without more shrieking. So to save you all from that nonsense, check out his site http://www.lyndonwade.com/ or at least read check out today's Picture Show on npr.com.
Posted by Tiff at 9:06 PM 3 comments:

I have had a love affair with words and books since I was four years old. My parents are great storytellers and being from the south, it's almost a prerequisite. My dad read The Hobbit to me growing up. It was my bedtime story! How was I suppose to sleep when Bilbo was adventuring around? I was worried he would starve if he didn't get his 6 meals a day! My parents also told tall tales to scare the jeepers out of me. My Dad once told me to stop playing with my bellybutton because it was the screw that held my legs in place. It worked and to this day do NOT touch my bellybutton. Ack!

I remember trying to follow along with my older brother's books when we were in elemtary school. I was brilliant, or so I thought, and when I began officially learning to read I plowed through the A book, skipped the B book and fell head first into the C book. Who knew that there were so many stories I had not heard? Who knew that the key was being able to read them myself. Instant motivation for a first grader with an imagination the size of Wyoming.

Talking. Check. Reading. Check. Writing. Check. All things I love to do. So here we are. I have a huge list of books I want to read and mountains of things that catch my eye daily. My love affair is an addictive thing. I enjoy writing and need an outlet so what better to do than share some stories and talk about others? I want to write about what I am reading, talk about my favorite books and stories and hopefully have you pitch in and make my reading list even longer.

The best stories are the ones that leave you standing in the window waiting to see who will visit next.
Posted by Tiff at 7:17 PM 2 comments: