This was a random find at the bookstore and I am very happy about it. It is a book of prose about Irish folklore told in three colle titled The Celtic Twilight, The Secret Rose and Stories of Red Hamrahan. I love the country myths, the spiritual traditions, legends and stories of the occult. What's more fun to read about than banshees and faeries, demons and curses, village ghosts and mystic poets?

Lord James was always the gentleman 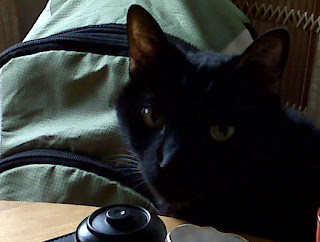 Beloved cat, beloved friend,
May our friendship
Never end.
From whiskers’ edge
To tip of tail,
May Bast protect
Without fail.
Nine times nine
Your life and mine,
In Bast’s blessing,
Intertwined.
Posted by Tiff at 6:07 PM 1 comment: Links to this post